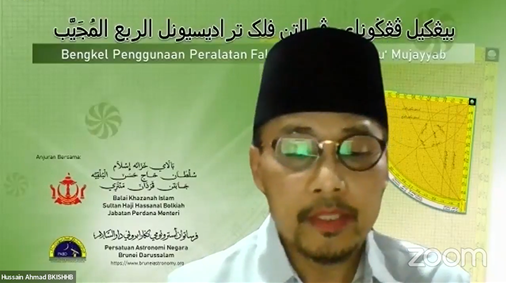 The workshop’s objective is to provide an opportunity to the public to learn the use of a traditional astronomical instrument, specifically the Rubu’ Mujayyab (Sine Quadrant) in effort to preserve the excellence of Islamic Astronomy (Falak Syarie) knowledge. It is also in line with the society’s main objective, which is to develop and strengthen the field of astronomy, especially Falak Syarie in Brunei Darussalam.

A Rubu’ Mujayyab activist, Ustaz Anuar bin Ariffin, was the invited facilitator of the workshop. He used to serve the Falak section at Pulau Pinang’s Mufti Department and he is currently working at the Religious Affairs Department Butterworth District in Pulau Pinang. He is also actively involved in teaching astronomy courses and has received numerous invitations from educational institutions and mosques throughout Malaysia.

The workshop will provide basic theory and practical training on the use of the Rubu’ Mujayyab. There will also be practical sessions during the day to further strengthen the participants’ understanding. Seven key topics were covered during the workshop highlighting on the applications of Rubu’ Mujayyab: Introduction to traditional Falak instrument; Method of obtaining time with the use of Rubu’ Mujayyab, Solutions to trigonometric calculations, Measurement when the Sun is overhead, Determining longitude and latitude; Calculation of prayer times and; Calculation of the direction of the Kiblat.

Prior to the workshop, participants were also instructed to create their own (DIY) printed Rubu’ Mujayyab based on the given template and instructional video provided by the organising committees.

In his speech, Dr Haji Mohammed Hussain stated that one of the nine galleries at BKISHHB – Gallery 8 is an Astronomy Gallery exhibiting various traditional astronomical instruments such as Astrolabe, Rubu’ Mujayyab and Rubu’ Mujannah. Therefore, this workshop is in line with the role and function of BKISHHB and is amongst the efforts to support and realise the BKISHHB’s strategic goal which is to become a heritage centre for Islamic Knowledge that is
capable of cultivating knowledge by conducting educational activities. This will also open opportunities for BKISHHB to conduct research with strategic partners that has the knowledge and expertise in specific fields.

He also mentioned that despite the current pandemic, this should not deter us from conducting any educational activities. The response from the public to participate in this workshop was encouraging as in a very short period of time registration had to be closed early due to reaching the maximum limit. There were 95 individuals who had registered for the online workshop and 7 of these were participants from neighbouring countries: Malaysia
and Indonesia representing several educational institutions and astronomical societies in the region.

Among the attendees of the workshop was Haji Mahadi bin Haji Mohd Tahir, the President of PABD, Executive Committees of PABD, Officers of BKISHHB as well as invited guests from government agencies and higher education institutions who are also participants of the workshop.

Rubu’ Mujayyab is believed to have been popularised before the 8th century. Al-Khawarizmi (770-840) was one of the scholars that benefitted through the use of this instrument to calculate prayer times. Linguistically, Rubu’ means a quarter, and Jayb means a shirt’s pocket. Al-Biruni defined jayb as Sine. In English, it is known as the Quadrant. In terms of terminology, the Rubu’ Mujayyab is defined as a traditional astronomical instrument created specifically to measure angles and time to calculate prayer times, direction of the Kiblat and the beginning of the Islamic month.