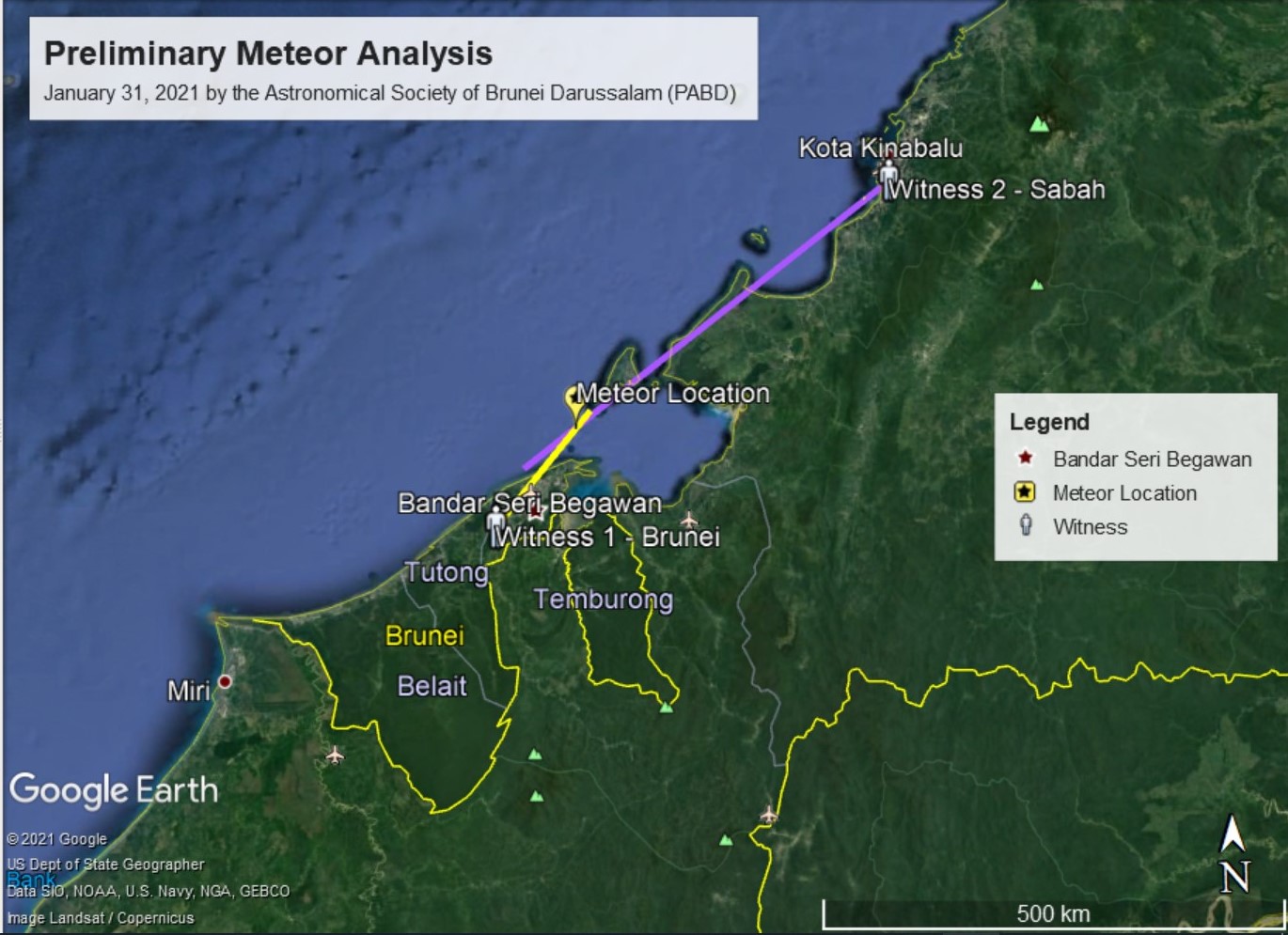 Bandar Seri Begawan – The Astronomical Society of Brunei Darussalam (PABD) is still investigating after sightings of a mysterious fireball accompanied with a loud bang was reported falling to earth in broad daylight last week, January 31, 2021.

On Sunday (February 7, 2021), a team of members of the PABD conducted further examination at the locations based on firsthand sighting video and photograph of the meteor event.

PABD is also working closely with the Sabah Stargazers with the support by a group of 4×4 off-road enthusiasts known as Jimmy Sierra Brunei Community by exchanging information on the coordinates in the sky of the reported meteor.

Currently, there are two key sources of evidence based on two dashcam-footage that accidentally caught the meteor at the same time – from Kampong Kulapis, Brunei Darussalam and Penampang, Sabah. These useful information were solid proof to determine the approximate physical characteristics of the meteor and its location, which were later triangulated by statistics from another eyewitness.

The fireball brightness is difficult to estimate due to bright sunlight, but usually ranges from magnitude -5 (equivalent to the planet Venus) to magnitude -10 (light produced by a half-illuminated moon). Based on the video recording by Abd Wafiy bin Hj Rudzi, the light from a fireball was estimated to be at magnitude -13 which is equivalent to the light produced by a full moon. This makes the event exceedingly rare and special.

Most ordinary meteors with diameter 1 millimeter or about the size of a grain of sand have the capability to produce a rapid flash as they streak the sky. But bright fireball that was seen easily in the daytime last week are many times that size – anywhere from a baseball-sized object to something as big as a small car.

Preliminary analysis by PABD has pinpointed the estimated location of the meteor explosion which occurred in the airspace of South China Sea, about 30 kilometers away from Bandar Seri Begawan, near the Brunei Bay and Southwest of Labuan Island.

Based on the elevation angles, the position of the fireball when the intense explosion occurred was computed about 35 km high above the ground.

When a meteor traveling at tremendous velocities penetrates to the Earth’s stratosphere, at an altitude of below 60 kilometers and explodes as a bolide, there is a high chance that the meteor triggers sonic boom which can be heard on the ground below.

NASA’s Geostationary Lightning Mapper (GLM) instruments on GOES weather satellites has detected the fireball travelling at velocity of 14 km/s, about 40 times the speed of sound with radiated energy impact in the atmosphere of equivalent to 720 tons of TNT above Brunei Darussalam. This information was reported by the Centre of Near-Earth Object Studies, Jet Propulsion Laboratory, California Institute of Technology.

The International Meteor Organization (IMO) has also verified and catalogued last week’s incident as Event 632-2021 on their website. In addition to the sonic boom heard by hundreds of netizens over social media, there were 11 confirmed reports about a fireball was seen over Belait District, Brunei-Muara District and Sabah on Sunday, January 31, 2021 around 03:02 UT or 11:02 am local time. However, the meteor trajectory and impact status has not yet been established due to missing reliable and accurate data.

The IMO’s International Fireball Program analyses meteor information provided by public eyewitness online which can be combined with other eye-witnesses to give a good estimate of the trajectory of the fireball, to help determine if a ground fall occurred and perhaps if the meteorite can be recovered.

Since 2005, the IMO had received about 224,000 fireballs reports from around the world, or an average of 15,000 reports every year.  Only a very few fireballs relate to meteorite falls.

PABD is keen to share the data and findings to the international and regional scientific community to further conduct a research on the meteor.