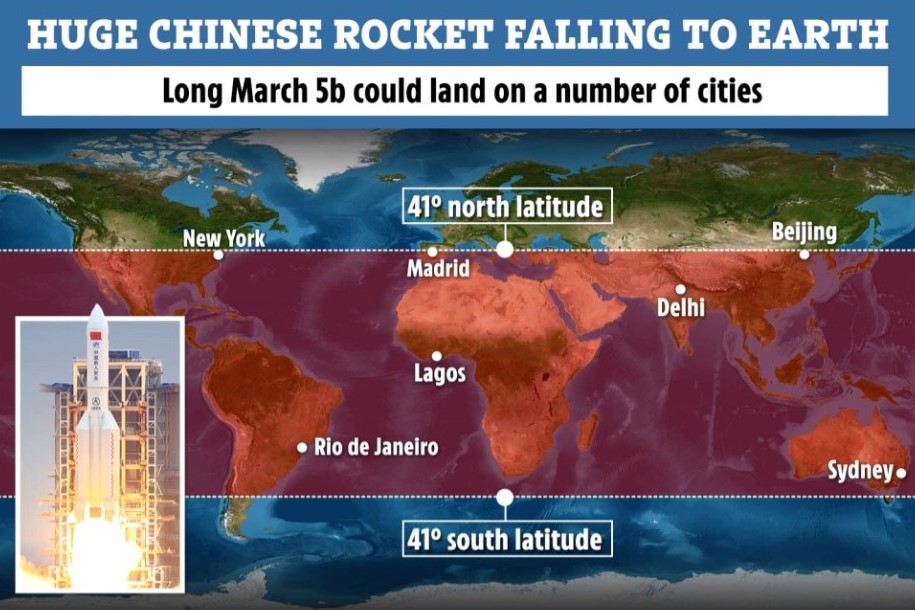 CelesTrak now provides a live view of the evolving decay of the Long March-5B rocket body that launched TIANHE.

Livescience.com – The huge, 100-foot-tall (30 meters) core of a Chinese rocket is tumbling wildly through low-Earth orbit and could make an uncontrolled reentry through the atmosphere in the coming days, according to news reports.

The core belongs to a Long March 5B rocket (a version of China’s largest rocket), which successfully launched a module for China’s planned Tianhe space station into orbit on Wednesday (April 28). Following the module’s deployment, the rocket core was expected to make maneuvers for a controlled reentry into Earth’s atmosphere, according to SpaceNews — however, that didn’t happen.

Ground-based radars soon detected the rocket core tumbling through orbit, oscillating between altitudes of 106 and 231 miles (170 and 372 kilometers) above Earth’s surface and traveling at more than 15,840 mph (25,490 km/h). (The U.S. military designated the object 2021-035B, and you can monitor its progress around the planet here.)

The drag of Earth’s atmosphere will eventually tug the rocket core out of orbit — however, given the object’s high speed and variable altitude, it’s impossible to predict exactly where or when it will fall toward Earth’s surface. Much of the core will likely burn up in the planet’s atmosphere, SpaceNews reported, but there is a chance that some chunks of debris will survive the reentry and rain down on the land or ocean.

This, sadly, wouldn’t be the first time. In May 2020, a Long March 5B rocket slammed through the atmosphere, partially burning up on its descent, Live Science previously reported. The core fell largely into the Atlantic Ocean, but some debris landed in West Africa. According to the South China Morning Post, some chunks of debris crashed into inhabited villages in Côte d’Ivoire, though thankfully no casualties were reported.

Jonathan McDowell, a Harvard astrophysicist and orbital object tracker, noted at the time that the Long March 5B core was the heaviest object to make an uncontrolled reentry through the atmosphere in nearly three decades. Before breaking apart, the core weighed about 19.6 tons (17,800 kilograms); the last time a heavier object made an uncontrolled reentry was in 1991, when the 43-ton (39,000 kg) Salyut-7 Soviet space station fell through the atmosphere over Argentina, McDowell wrote on Twitter.

In a recent interview with SpaceNews, McDowell noted that the core currently tumbling through orbit is about seven times more massive than the Falcon 9 rocket’s second stage that lit up the sky over Seattle about a month ago. If the core reenters at night, it could produce a similar light show.

This was the first of 11 planned launches involved in the construction of China’s Tianhe, or “Heavenly Harmony,” space station, according to SpaceNews. The station is expected to be complete in late 2022.