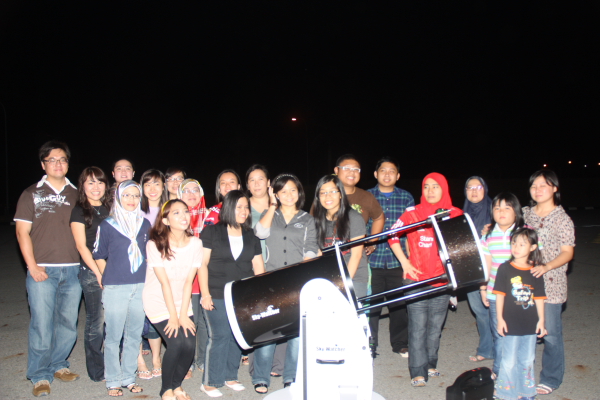 Written by Abdul Aziz Pandin Thursday, 21 April 2011
Bandar Seri Begawan – A Group of Universiti Brunei Darussalam (UBD)  students from the BEd General Science programme set up a star gazing session at the university’s Chancellor Hall’s car park Tuesday night. The students who have studied Astrophysics, as part of their course, had a closer look at parts of our solar system. The group was led by Dyg Marlizayati Johari, a Physics lecturer who is currently giving lectures on Astrophysics, Awang Hazarry bin Hj Ali Ahmad ant Awang Hj Mohamad Azri bin Hj Awang Ibrahim from the Brunei Astronomy Society were also present with their equipment to help in the star gazing session.Since the night sky was clear, the group was able to see planet Saturn, a nebula, some constellations and also the moon.
Also present were some of the family members of the participants. — Courtesy of Borneo Bulletin

Amazing sky at International Observe the Moon Nigh

Thank you for your support. We hope you enjoyed y

Congratulations to all International Observe the M

2 days to go! Join us this Saturday in the world