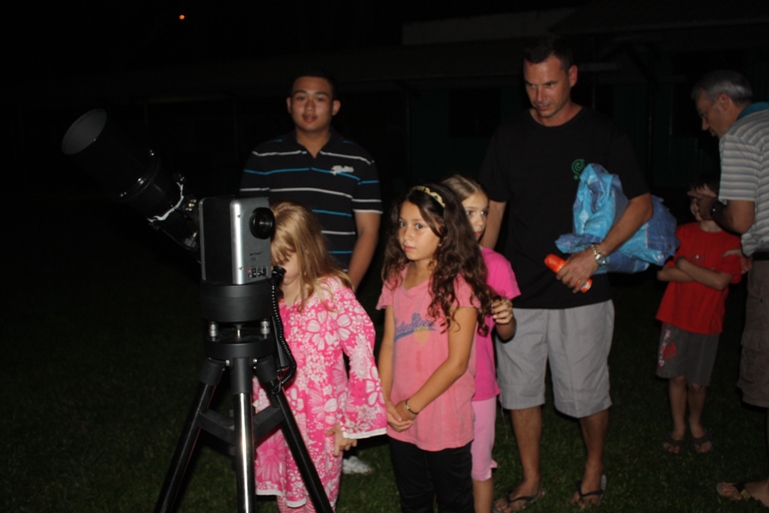 Summary: On the evening of Friday, October 23rd between 60 and 100 students, parents and teachers gathered at the International School Brunei to participate in Galilean Nights. The evening was blessed with a rarity in Brunei – clear skies! Hazarry bin Haji Ali Ahmad, treasurer of the Astronomical Society of Brunei, gave a presentation on what could be seen in the sky that night. Telescopes, provided by the Astronomical Society of Brunei and the Astronomy Unit of the Survey Department, were set up on the soccer field and people were treated to excellent views of the Moon and Jupiter. In the PTA hall visitors could take in a presentation to learn about light pollution or the latest discoveries about Jupiter. Year 12 and 13 CAS students did an amazing job engaging younger and “older” scientists in activities such as rainbow glasses, hidden messages, spectroscopes and star tracing.

Bandar Seri Begawan – Many students, their parents and teachers of the International School of Brunei (ISB), Berakas, have celebrated the Galilean Night this evening. The event took place at the school compounds with full of activities like planetarium display, skywatching, astronomy presentations, building a telescope, making a sundial and many other science experiments.

The event was organised by the school and jointly supported by the Brunei Survey Department and the Astronomical society of Brunei Darussalam.

Galilean nights were celebrated world widely on 22 to 24 of October this year to commemorate Galileo Galilei’s first observation of Jupiter through a telescope 400 years ago. Promoted by the International Astronomical Union, the aim of the night was to give people a chance to gaze the night sky through a telescope. More information on Galilean Nights here.

It was also meant to create awareness on the effect of light pollution especially in the city areas. Today, light pollution is a major concern of many skywatchers as the glare from inefficient lightings reduces visibility of stars in urban skies.

“I received lots of positive responses from parents tonight.” said Mr. Chris Rieger, a science teacher and one of the organiser at the school’s Galilean night. The clear sky that night offered ISB members a closer view of the planet Jupiter and its Galilean moons and the crescent moon.

Full moon tonight. It is when the Sun and the Moo

Congratulations! 28 participants have been selec