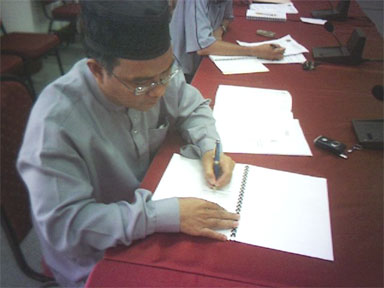 Awang Hj Mahadi bin Mohd. Tahir, a surveyor, was re-elected to be the new president of the Brunei Darussalam Astronomical Society (PABD).

The election took place at the association’s first Annual General Meeting (AGM) last Friday afternoon (01 April 2005) at International Convention Centre in the capital. The meeting commenced at 3.00 pm and proceeded with the restructuring the Pro-Tem committees, signing of the Society’s Constitution and preparing its annual activities.

Among the objectives of the association are to promote and encourage astronomy especially Islamic astronomy for the country and to channel information on issues relating to astronomy.

Ever since its first establishment in 2003, the association has organised many astronomical related activities which includes public sky watch and seminars.

News on the society’s current activities is available through its website www.bruneiastronomy.org