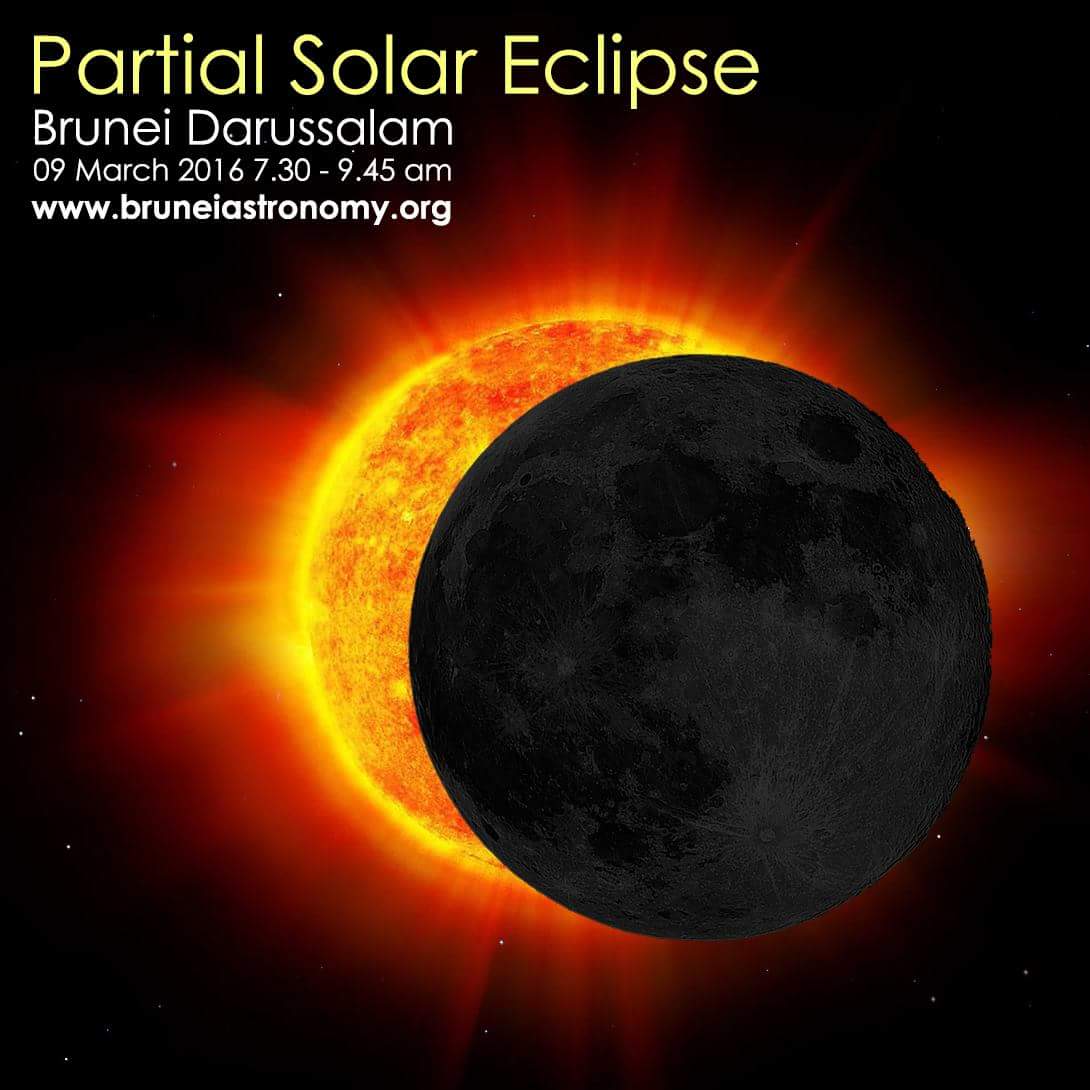 A perfect  alignment of the Earth-Moon-Sun bodies is required for a solar eclipse to occur. As seen from a location on Earth, a solar eclipse happens when the moon moves in front of the Sun thus block the Solar Disk. A simulation of the partial Solar Eclipse as seen from Brunei in the morning of March 9, 2016 is shown in the video above. Since we will only witness the partial obscuration of the sun by the moon, features that are normally visible during totality such as corona and darkening of the sky/surrounding will not be observable from Brunei.

Visibility
On March 9th, 2016 Wednesday, the total solar eclipse will be visible from Sumatra, Borneo, Sulawesi and from locations in the Pacific ocean.
The eclipse will be partial for people in South and East Asia (including Brunei) and northern and eastern Australia. The eclipse map below shows the limiting magnitude of the solar eclipse around our neighboring countries (note the different partial obscuration based on the magnitude) and total solar eclipse only happens on the small stretch totality path.

Eclipse timing for Brunei Darussalam
The eclipse which will start at 7.30am, will last for about two hours and 24 minutes in Brunei. The maximum phase of the eclipse will occur at 8.37am with the moon covering 76.5 per cent of the sun’s disc. The partial eclipse will end when the moon leaves the sun’s edge at 9.54am. Diagrams of the eclipse sequence or phases and Local Time from Brunei are as follow,

Where to See the Eclipse in Brunei?
The celestial spectacle will be visible anywhere in Brunei as long as we have a clear sky. Do make sure that you have an unblocked Eastern horizon i.e. free from trees, buildings etc. The venue for national solar eclipse observation will be announced as soon as we have confirmation (please let us know via email at hazarry@bruneiastronomy.org, if you are organising any solar eclipse observation).

Watching a solar eclipse will be a breath taking experience especially because of it’s rarity, mystery and religious beliefs. However, it comes with a warning! Our sun emits dangerous radiations. Never look directly at the Sun without proper solar filter. Solar UV radiation can burn the retinas at the back of your eyes, and cause permanent damage or even blindness. Avoid using improper solar filters such CD, plastic bag, sunglasses, exposed x-ray film etc. to view the sun as harmful radiation can still pass through these objects.  You can buy a solar eclipse glass here at the Mall Gadong, Brunei. Another safe method of viewing the sun is to use a projection of the sun using small pin-hole camera or binocular or a small telescope.

Past and Future eclipses in Brunei

The Jerudong International School’s youtube webpage had posted a live stream coverage of the phenomena online via this link.