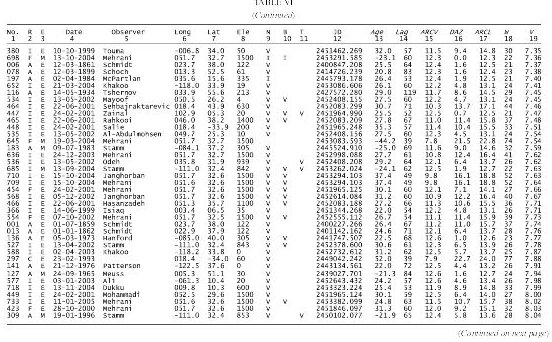 Abstract. A new criterion for lunar crescent visibility has been established using 737 observations, almost half of them obtained by the Islamic Crescent Observation Project (ICOP). This criterion is based on two variables, viz. the topocentric arc of vision and the topocentric crescent width. The new model is able to predict the visibility of the lunar crescent both for naked eye and optically aided observations. From the database we found a Danjon limit of 6.4 degrees.

Introduction The lunar crescent visibility has been studied by many astronomers since the Babylonian era, with as a result currently more than 12 different criteria for lunar crescent visibility, based on a number of sightings in different lunar conditions. Many of these criteria were developed by Islamic astronomers, since a number of Islamic religiouseventsaredirectlyrelatedtolunarcrescentsighting.Forexample,thenew Lunar (Hijric) month begins on the next day of sighting the new crescent at west after sunset.

A penumbral lunar eclipse occurs from 1.45 am unti

[Update: No-go! Launch aborted due to weather and

Tonight’s Mercury and Earthshine [📷 1] The pl

The perfect Sun-Earth-Moon alignment on June 21, 2