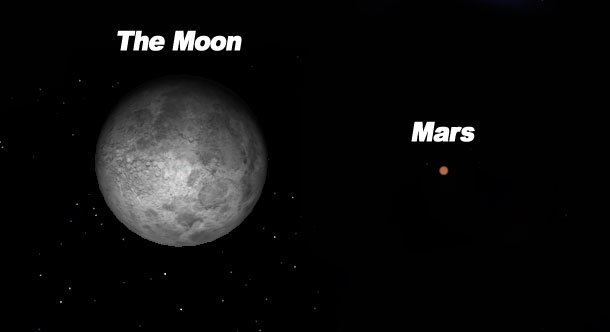 *27th Aug the Whole World is waiting for………….* Planet Mars will be the brightest in the night sky starting August. It will look as large as the full moon to the naked eye. This will cultivate on Aug. 27 when Mars comes within 34.65M miles of earth. Be sure to watch the sky on Aug. 27 12:30 am . It will look like the earth has 2 moons. The next time Mars may come this close is in 2287.

Share this with your friends as NO ONE ALIVE TODAY will ever see it again.

The above is an email which is still going around claiming that Mars will approach Earth on August 27th; the encounter will be so close, the email states, that Mars will rival the full Moon in size and brightness. (Imagine the tides!)

Above: Comparison between the apparent size of the Moon (Left) and Mars (Right) as seen on the sky. The planet will appear as an orange bright “star” which is about 1/225 the size of the moon.

Don’t believe it. The Mars Hoax email first appeared in 2003. On August 27th of that year, Mars really did come historically close to Earth. But the email’s claim that Mars would rival the Moon was grossly exaggerated. Every August since 2003, the email has staged a revival.

Above: The inner planets in December 2007, the orbit of mars and earth will be closest on 18th December.

In fact this year, on 18 December 2007, the earth will be closely approaching with the planet Mars which is about 0.589 AU and not in August as claimed by the email. Even at this distance, it is still a vast distance for the planet to appear as big as the moon.

How will the planet looks like then? It’s a great news where by mars will be appear brighter and brighter in the night sky as it approching closer by december. You can distinguish it from the other stars by its reddish colour.