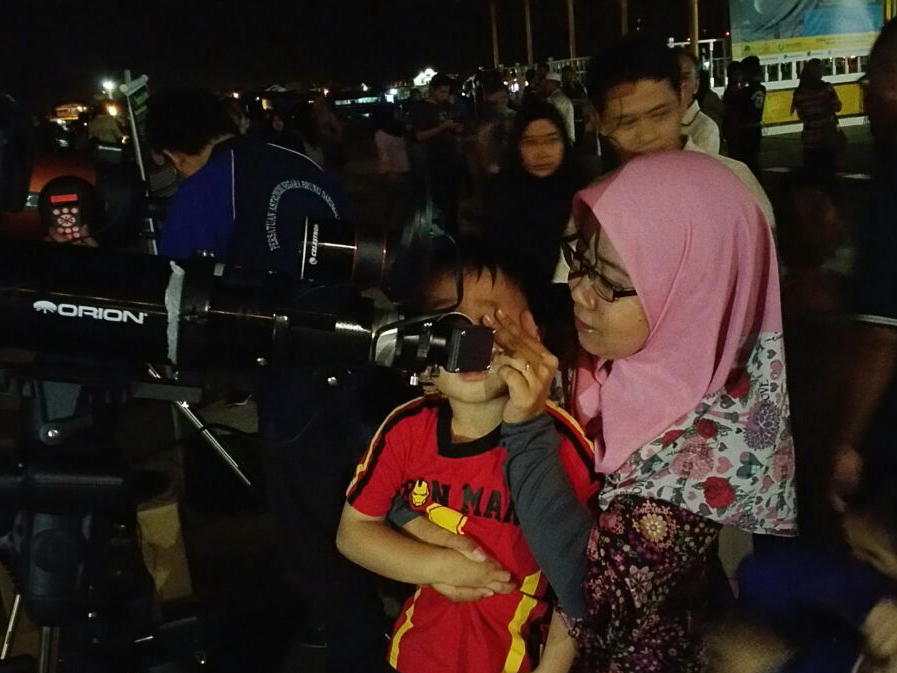 Bandar Seri Begawan  (2015 April 04) – Sky gazers and eclipse watchers gathered in the evening at Dermaga Diraja in the capital to observe the full eclipse of the Moon. The event was co-organised by Sultan Sharif´Ali Islamic University (UNISSA), Survey Deparment and the Astronomical Society of Brunei Darussalam.

Despite the weather was partly cloudy, most of the eclipse stages were observable from moon rise, at about 7 pm, till the end of partial phase, at 9.45 pm.

Totality’s duration was less than 5 minutes that made this phenomenon as the briefest sight of totality in the 21st century.

During the Lunar Eclipse, a Sunat Gerhana Prayer was performed at the nearby surau as a recommended prayer (salatul-kusuf) in congregation. Public talks on the Scientific and Islamic perspectives of the eclipse and its significant were also delivered by Haji Julaihi bin Hj Lamat of Survey Department and Dr Sayyed Abdul Hamid al-Mahdaly from UNISSA.

PABD wishes to thank all working committees of UNISSA and Survey Department for your hard work making this event possible, and non-stop huge responses from members of the public for the continuous support.

People in Brunei Darussalam had the opportunity to watch an astronomical phenomenon – the Eclipse of the Moon. The total eclipse occurred for four minutes between 7:58 to 8:02 last night. The observation was conducted by the Brunei Darussalam Astronomy Association with the cooperation of the Survey Department and the Sultan Sharif Ali Islamic University, UNISSA.

The Royal Wharf in the capital became the observation centre for people to witness the phenomenon. Several telescopes were provided by the organisers to allow members of the public to gaze at the lunar eclipse in good weather. The phenomenon occurs when the Sun, Earth and Moon line up causing the Moon to pass through the Earth’s shadow. The brief spectacle was also seen in Japan, Australia, and New Zealand as well as western North America. A partial lunar eclipse is predicted to occur in August 2017