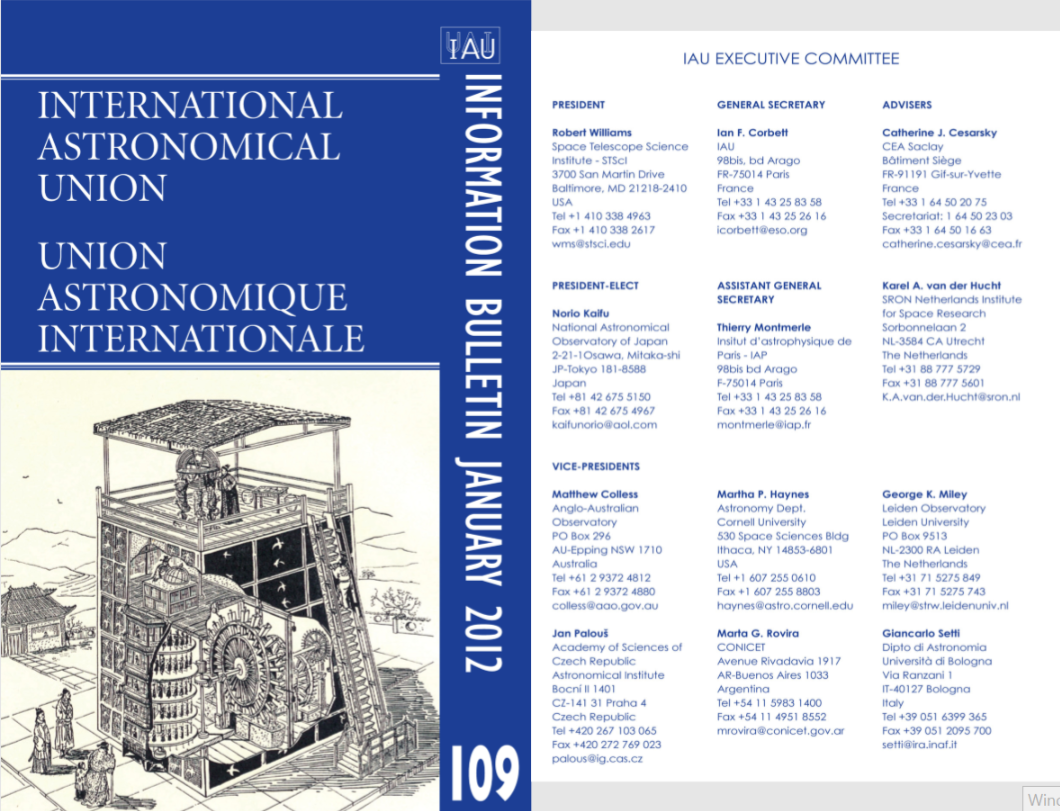 Brunei Darussalam is a small Kingdom in South-East Asia located on the northern shore of the island of Borneo. The state’s major industry on petroleum makes Brunei Darussalam a prosperous and progressive country, with a population of approximately 400,000 (July 2010). Brunei has the second highest Human Development Index among South East Asia nations, after Singapore, and is classified as a Developed Country.

Boonrucksar Soonthornthum visited Brunei Darussalam during July 13-19, 2011 and Hakim Malasan, during July 16-19, 2011, with the following objectives:

I was received by Dr. Haji Norarfan bin Haji Zainal, Assistant Ra’es of KUPU SB. On 14 July, we met with Prof Abdullah Awang Lampoh, the Deputy Rector, and staff of KUPU SB. I gave a presentation on the IAU and explained how the PGWWDA and related programme groups such as TAD, ISYA and EA can help to promote and develop astronomy and conversely: how South-East Asian countries can support IAU and PGWWDA to achieve their missions. I also presented the establishments of the South-East Asian Astronomy Network (SEAAN) and the National Astronomical Research Institute of Thailand (NARIT) and convinced them to join.

• Visit to the University of Brunei Darussalam (UBD)

My visit to the UBD on 15 July was hosted by Prof Dato Haji Mohamed Abdul Majid, Dean of the Faculty of Science of UBD. We met with his Deputy Deans, Dr. Pg.Mohd. Iskandar Pg.Hj.Petra and Dr.Jose H.Santos. I gave a similar presentation to that given at KUPU SB concerning the IAU and PGWWDA, the establishment of SEAAN and NARIT. The Faculty of Science of UBD has about 30 undergraduate students majoring in Physics, Chemistry, Biology and Information Technology. Like KUPU SB, the UBD does not offer any course in astronomy and has no faculty staff in astronomy. They are interested in joining astronomical activities with SEAAN and hope to have an astronomy course or astronomical research offers at the Faculty of Science in the future.

From the discussion, it emerged that UBD would like to explore the possibility of sending some of their 3rd or 4th -year Physics students to be trained in astronomy and astronomical instrumentation at NARIT in Thailand. It was agreed that NARIT and UBD will discuss this further. Since the regional observatory for publics of NARIT in the Southern Thailand, which is close to Brunei, will be constructed in Songkla Province by the end of 2011, it can be visited by UBD staffs and students as well as related institutes in Brunei.

I also visited the undergraduate Physics Laboratory of the Faculty of Science, UBD. There are a number of small telescopes (about 20 refracting telescopes with diameters of 2-4 inches) which are used for telescope‟s alignment teaching but not much for the astronomical observation purpose.

• The Visit at Astronomical Society of Negara Brunei Darussalam

PABD was officially registered in 2003. It is a non-profit organisation managed by an executive committee. Its objectives are

PABD has four categories of membership that are open to residents of Brunei Darussalam: ordinary, student, corporate and honorary. PABD organises activities such as sidewalk astronomy, eclipse watching and new moon watching, etc. Information on its current activities is available through its website.

I presented PABD the information about IAU, PGWWDA, SEAAN and NARIT. They are interested in becoming the individual members of the IAU but unfortunately that there is still no professional astronomer at all in the country. I invite them to join the SEAAN where they can participate in astronomical activities with the South-East Asian countries, eg. NARIT, ITB etc. PABD can also organise trips to Thailand, Indonesia and Malaysia to experience some astronomical infrastructures and activities of those countries. Through the internet, PABD can access some facilities of NARIT especially the regional observatory for publics in Songkla (Southern Province of Thailand).

On 18 July, the Seri Begawan Religious Teaching University College, Kolej Universiti Perguruan Ugama Seri Begawan (KUPU SB), in collaboration with the Astronomy Unit, Survey Department, Ministry of Development organised a programme of Al-Ihya Al-Diniyyah outreach “Islamic Astronomy and Astronomy Education Convention” with a theme of Education and the Development of Astronomy and Astronomy Syar‟ie. The Minister of Religious Affairs of Brunei presided over the opening ceremony and participated on the public lectures. There were over a hundred audiences on this seminar.

I am informed by KUPU SB that the Minister of Religious has now assigned KUPU SB to open an astronomy course in the undergraduate programme.

• Visit to the Survey Department, Ministry of Development

On 16 July, Hakim Malasan and I visited the Survey Department, Ministry of Development. Our visit was hosted by Mohd Jamil Ali, Surveyor General and staff of the Astronomy Unit of the Survey Department which is in charge by Mahadi Tahir, Senior Surveyor and Haji Julaihi Bin Haji Lamat, Surveyor. A moon sighting station under the operation of the Astronomy Unit is located at Bukit Agok (Latitude 4º 54′ 50″.9 N, Longitude 114º 47′ 12″.7 E) at the altitude of 105 meters above the mean sea level. Small telescopes, binocular and theodolites are used for observations. A new observatory with a 40-cm RC telescope and 5-meter diameter dome is planned to build at the moon sighting station at Bukit Agok. At present, two students are studying astronomy at undergraduate level in U.K. After graduation, they will be back to work at the Survey Department.

There are several positive signs for the development of astronomy in Brunei Darussalam. Astronomy is currently introduced through Islamic astronomy, and there is significant public interest in astronomy. With more support and follow up by the IAU and other countries, I believe that astronomy will be well established in the near future. Our suggestions are as follows: